Listing awards on your resume is an excellent way to show off your skills to a potential employer. We’ll show you everything you need to know about how and where to list them, as well as types of awards to include in your resume, with examples. 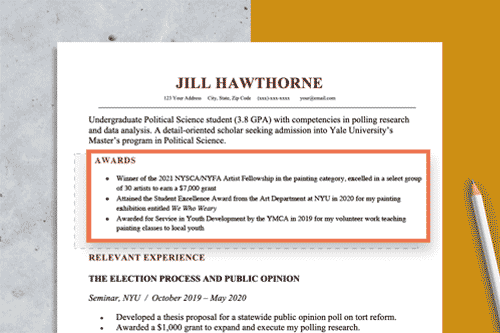 Putting awards on a resume increases your chances of impressing potential employers. Awards don’t have to be shiny trophies. They can come in other forms: honors you’ve received at school such as placement on the Dean’s List, recognition in the workplace, or notable accomplishments you’d like to show off. In this guide we’ll explain:

Should you put awards on your resume?

Yes, you should put awards on your resume if they add to your relevant experience and qualifications. Awards are a great way to highlight your skills and expertise in a particular area, and they’re an excellent addition for entry-level candidates who may lack relevant experience.

However, if you list an excessive number of awards or include ones unrelated to the position you’re applying for, it may come across as unprofessional. For example, if you’re applying for a job at a marketing firm, then there’s no need to put on your resume that you won first prize in your county’s chili competition (but congratulations!).

When it comes to listing awards on your resume, include the following information:

Where to put awards on a resume

Put your awards in the section of your resume where they’re most relevant. For example, list an education award in the education section and a professional award in the work experience section. This way, you’re embedding awards within their relevant context, providing evidence for your qualifications.

Additionally, if you have one particularly strong award that you want to shine the spotlight on, highlight it in your resume introduction.

In some cases, it’s also a good option to add a dedicated awards section to your resume. For example, if you have extra (relevant) awards you would like to list that don’t necessarily fit into other sections, if you’re an entry-level candidate lacking work experience, or if you simply want to draw a hiring manager’s attention to your awards, then showcase them in a dedicated “Awards” section.

Here’s an example of what a dedicated awards section looks like on a resume: 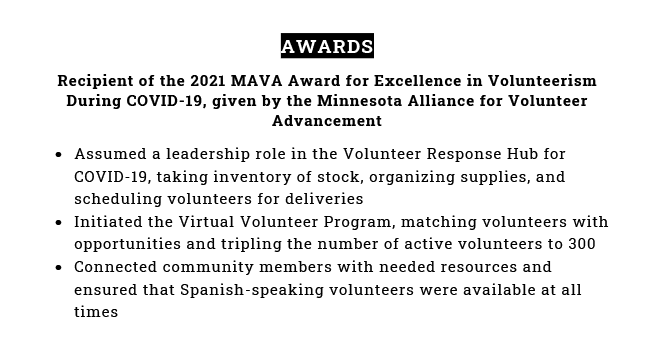 Types of awards to put on a resume (with examples)

Academic awards show a hiring manager that you care about the quality of your work and have the drive to achieve at a high level. Not only can academic awards demonstrate your qualifications in a specific field, but they can also highlight many of your other skills – for example, a strong work ethic and the ability to achieve long-term goals.

Here are some examples of academic achievement awards you can include in your resume:

Academic awards should be listed in the education section of your resume in bullet points under your school information.

Professional awards demonstrate a variety of hard and soft skills, from solid team leadership capabilities to exceptional salesmanship. Professional awards can range from annual company awards to industry-wide recognition. Company awards highlight your value as an employee, while industry awards shine a light on your expertise and authority.

Here are some of the professional awards you should put on your resume:

Professional awards can be listed in your work experience section as bullet points under the corresponding job. If you’ve received a prominent industry award, it is worth featuring such an achievement in your resume introduction. 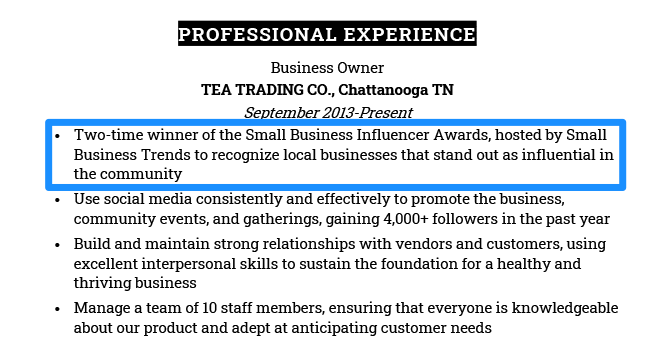 There are a wide range of military awards given to those who demonstrate impeccable technical skills, dedication, or bravery. While these awards aren’t directly relevant to most civilian jobs, they highlight a variety of soft skills, such as leadership, loyalty, and teamwork.

List military awards in the work experience under the position in which the award was received, similar to professional awards.

There are all kinds of other awards you can list on your resume, from volunteer awards to community service awards. While not always directly relevant to a career, these awards are strong indicators of valuable soft skills that make you a desirable candidate to any hiring manager.

Here are just a few examples of other types of awards you should include on your resume:

Many of these awards may not naturally fall into the work experience or education sections of your resume. If this is the case, consider adding an awards section to your resume, like in the example below.

Corissa is a Content Writer and Resume Expert at Resume Genius, where she loves equipping others with the tools they need to pursue their dreams. She graduated from the... more